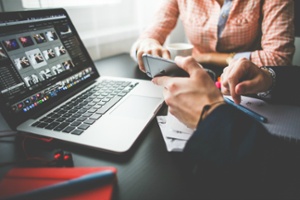 In this modern age of technology, many businesses are now sprinting lightyears ahead with fully adaptable cloud computing technology, software-as-a-service (SaaS) and BYOD (Bring Your Own Device)… Are you still desperately clinging to the past?

Modernising your current infrastructure and ways of working may seem like another headache you don’t need right now, but with so many great benefits (such as increased productivity, time-saving, greater scalability and more), you really can’t afford not to.

Below, we’ve put together a collection of the latest statistics that prove there’s no longer a place for your ‘Heath Robinson’ IT strategy:

Let’s first take a look at cloud computing, who’s using it, and how they’re using it.The below statistics in favour of cloud computing are overwhelming, with some companies adopting hybrid strategies, while others commit fully to the cloud and SaaS.

1. Approximately 82% of enterprises now have a hybrid cloud strategy in place

Quite a significant increase from the 74% reported in 2014. Not using the cloud as part of your strategy yet? You’re falling behind.

2. 93% of businesses are in the process of adopting cloud

3. Around 78% of US small businesses will have fully adopted cloud computing by 2020

4. 80% of businesses across all industries reported moderate-to-heavy investing in private cloud

Private cloud vs. public – which do YOU prefer?

5. By 2018, over 60% of enterprises will have at least half of their infrastructure in the cloud

6. Around 42% of IT decision makers were planning to increase their cloud spending in 2015

Out of that, the greatest growth (52%) was from enterprises with 1000+ employees.

Next, let’s take a closer look at Software-as-a-Service – the use of applications that are hosted in the cloud – which is also showing no sign of slowing down. With services such as SalesForce, Microsoft, Oracle, NetSuite, Marketo, Hubspot, and more, are you using any of these SaaS services yet?

7. Global SaaS software revenues are forecasted to reach £68.9 billion in 2016

And more and more companies are beginning to use big data analytics as part of their commercial AND open data sets.

BYOD (Bring Your Own Device)

Ah, BYOD. This idea has been gradually becoming more popular, despite lingering security concerns (which by the way, is the main reason some companies are NOT yet adopting BYOD).

The driving force behind BYOD seems to have developed from an increasing interest and awareness in technology, with many now owning devices such as smartphones, tablets and high-end computers.

11. Around 38% of companies expect to stop providing devices to workers by 2016.

Still providing your employees with devices? Maybe it’s time for a rethink.

12. Over 70% of mobile professionals will be working on personal smart devices by 2018

13. Around 85% of organisations now allow their employees to bring their own devices to work

Although the research by IDG doesn’t specifically mention whether they are actually using them strictly for work.

So, there we have it: 13 incredible statistics that show overwhelming evidence the global trend towards forward-thinking technology is only becoming stronger. If your company is yet to adopt cloud computing, SaaS and BYOB, ignoring these recent statistics could mean falling behind your competitors in an already tough international market.

Is your current IT services provider able to provide you with the tools and support you need? And if not, what could this be costing your business?